“With leases on City land expiring in the next 15-25 years, Council has the opportunity to consider a 21st century renewal of the original vision for False Creek South established in the 1970s … including 80 acres of land under the stewardship of the City, prime waterfront land that could be leveraged via renewal over next several decades to substantially advance Council’s policy objectives, while at the same time respecting the existing community and tenants on City land.”

Leasehold properties are an attractive option for prospective homebuyers, as they typically have below market valuations yet are located in desirable areas. I often get questions regarding the purchase of this type of interest in land, and it ultimately comes down to risk vs. utility. For instance, it is more difficult to obtain a loan to finance the purchase of leasehold properties, they do not significantly increase in value, and give rise to greater uncertainty surrounding lease expiry. Lease terms are outlined in what is called a head lease, including the length of the lease which typically ranges from 50 to 99 years. As per the BCFSA definition of leasehold interest, it is a “right to use a residential property for a long, but limited period of time.“

One of the areas under consideration for redevelopment, is False Creek South—80% of which is owned by the City of Vancouver through its Property Endowment Fund, made up of co-op and non-market housing, leasehold stratas, and market rental homes. The remainder of the land is owned by other levels of government, the Squamish First Nation, or private owners. There hasn’t been any new construction of housing since False Creek South’s inception in the 1970s and 1980s.

Much of the land was leased by the City via 60-year leases, and with most of the leases expiring in the next 15 to 25 years, existing residents are rightfully experiencing significant stress after more than a decade of meetings with the City as per Councillor Colleen Hardwick. Hardwick recently filed a motion regarding the future of False Creek South, requesting that the City immediately proceed with lease extensions and renewals for all strata and co-op leaseholds in the neighborhood respectively.

False Creek South is a unique waterfront community, and the City has an important responsibility in addressing Vancouver’s housing crisis by maximizing the highest and best use of the land, while balancing the interests of current residents in the neighborhood. The ~5,600 residents in False Creek South receive a level of protection through the Resident Protection and Retention Plan (RPRP), which aligns with the existing Tenant Relocation and Protection Policy (TRPP) and the False Creek South Engagement Principles:

The City of Vancouver’s conceptual plan for the future of the neighborhood was released publicly on October 12, 2021. It aims to more than triple the number of homes, adding new buildings of 6 to 28 storeys by 2040 and beyond. The key term is “conceptual”, as there is a mandate to address issues associated with tenure, and that involves dialogue with the community through citywide public engagement before any concrete development plans move forward.

As a neighborhood known for its walkability and access to Granville Island, False Creek South is a special community cherished by residents and travelers alike. It is one of my favorite places to experience local culture and produce, and is easily accessible from the West End via False Creek Ferries. There are valid concerns regarding what will be considered “affordable housing”, but it’s encouraging to see significant progress with the City’s vision as to how they will convert underutilized land and airspace. It will be interesting to watch over the coming months and years, how the City will preserve the nature of the area in terms of density, traffic, and public space. 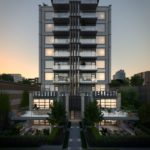